This is part of a regular series of Google Apps updates that we post every couple of weeks. Look for the label "Google Apps highlights" and subscribe to the series. - Ed.

Over the last two weeks, we've made improvements across Google Apps, some geared for individuals, others meant for business customers.

Green Robot icon in Gmail Labs
The green, orange and red chat bubbles in Gmail signal if your contacts are online, idle or unavailable, but as more people sign in from mobile devices, it's becoming harder to tell when someone is actually online at a computer or just connected with their phone. The Green Robot feature in Gmail Labs helps you spot when you might want to tailor your exchanges with more succinct messages for people who are signed in with Android-powered devices. Look for the green beaker icon at the top of Gmail to enable Green Robot and other Labs features.

Site templates
On Tuesday we launched templates for Google Sites. The templates gallery is filled with useful example sites ranging from wedding websites to corporate intranets, which you can copy and customize so they're just right. This lets you create a useful, visually appealing collaborative workspace in seconds. And if you have a great site other people would find useful, you can submit it to the gallery. If your business uses Google Sites, templates you submit stay private within your company. 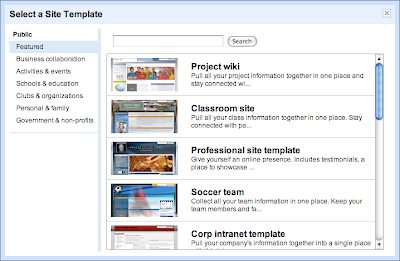 More overflow storage for less
If you're using Google Apps to store photos and manage large volumes of personal email, you'll be happy to hear we're now offering more extra storage for less. Our new overflow storage plans start at $5 per year for 20 GB. For the most avid shutterbugs, the 16 TB plan is enough space for roughly 8 million high resolution pictures! 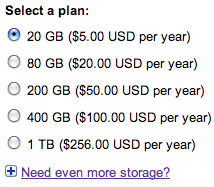 Improvements to Sync for Outlook
Last week, we released an update to Google Apps Sync for Microsoft Outlook, our tool that lets companies stop running Microsoft Exchange while still letting some employees use the familiar Outlook interface. Now, employees can sync multiple calendars between Outlook and Google Apps, and look up free/busy information from Exchange for co-workers who haven't migrated to Google Apps yet.

Google Apps Premier Edition innovation – Year in review
Businesses using Google Apps not only save money compared to running their own email systems, but also their employees get access to innovation at a much faster pace than with conventional business technologies. We've launched over 100 improvements to Google Apps in the last year, and on Thursday I hosted a webcast to recap noteworthy recent updates for businesses, including push email, contacts and calendar support for BlackBerry, iPhone, Windows Mobile and Android, Sync for Microsoft Outlook, offline access and more. If you missed the webcast, you can watch it on YouTube.

Who's gone Google?
This week I'm pleased to welcome a new crop of companies, schools and public agencies that have recently switched to Google Apps, including Delta Hotels, Michigan State University, the City of Orlando and the Office of the New Mexico Attorney General. The Motorola Mobile Devices Division deployed Google Apps to its employees this week, and the Los Angeles City Council recently voted unanimously to move 30,000 city employees to Google Apps.

We hope these updates help you get even more from Google Apps. For details and the latest news in this area, check out the Google Apps Blog.