Invite a friend to Google Voice

(Cross-posted from the Google Voice Blog)

Since the debut of Google Voice, our early users have shared lots of feedback that has led to some exciting new features, like the ability to receive SMS messages via email and the option to change your Google Voice number. But one of the most frequent requests we've received is for the ability to share Google Voice with friends and family.

Starting today, we're beginning to give out invitations to Google Voice users. If you currently use Google Voice, over the next few weeks, you'll see an "Invite a friend" link appear on the left-hand side of your inbox. 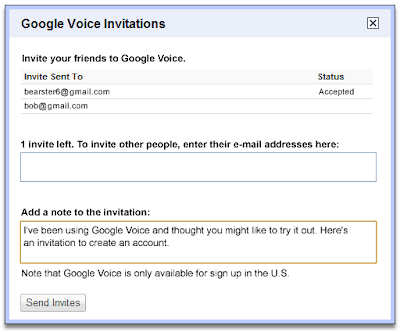 We'll be rolling out these invitations gradually, so don't worry if you don't see your invitations immediately. We're initially giving out three invites to each account, but we're planning to provide more invitations in the future.

If you don't have an account yet, you can request a Google Voice invitation at google.com/voiceinvite.