Today we're launching a number of improvements to the amount and quality of information you can find with Google Squared, as well as new tools to sort and export the data.

As we explained when we first launched Squared in Labs this summer, the product takes on a difficult technical challenge. It's a first step towards automatically extracting useful facts from all over the web and presenting them in meaningful way. It has the potential to be particularly useful for research questions where the answers may not live on a single website, but instead must be combined from many different pages.

Rather than return a list of the most relevant websites, Squared returns a "square" (or table) of facts, sourced from across the Internet. For example, if you search Squared for [us presidents], each row on the resulting table represents a particular United States President, and the columns include relevant facts about him, such as date of birth, a picture and a short description.

At launch, your first square could include at most 30 facts. With today's update, squares display four times as much data — up to 120 facts. For example, instead of seeing only five presidents and three categories, now you'll see a table with 20 presidents and up to six attributes. 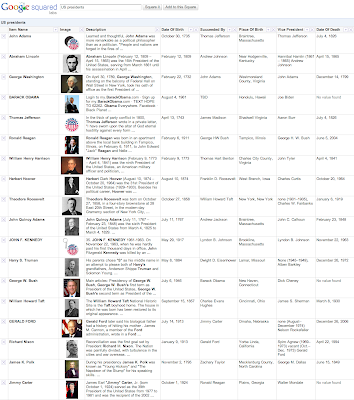 The quality of the information is also better, because we're ranking based on both relevance to your query and whether we can find high quality facts. For example, in the past we would show you a column for "First Lady" even if the column only included a couple accurate names. Now we're actively filtering out items (rows) and attributes (columns) from the initial square if we haven't found enough accurate data. Perhaps more interesting, we built Squared to learn from edits and corrections, so as people have been improving their squares, Google Squared has gotten better for everyone.

In addition to improving the information in Squared results, we've also added the ability to sort columns, so you can rank, group and compare items. Squared will even convert units in the background to make sure the data is sorted properly. For example:
We've also added the ability to export data from Squared to a Google Spreadsheet or a CSV file, which should make it easier to do interesting things with the data. For example, you can build a square for [african countries], add more items and columns, and examine the relationship between the literacy rate and GDP per capita. Once you've built your square to contain all the information you need, you can export the square to Google Spreadsheets and create a rough scatter plot:

There's a lot left to do before Squared is ready to leave Labs — we're still working on improving quality as well as the user interface — but we hope that our recent improvements make it more useful. In its experimental stage, Squared demonstrates an important future direction in search: understanding structured data from across the web to build new tools for organizing and presenting information. Try it out, and let us know what you think.