Seeing the forest through the cloud

Today, at the International Climate Change Conference (COP15) in Copenhagen, we demonstrated a new technology prototype that enables online, global-scale observation and measurement of changes in the earth's forests. We hope this technology will help stop the destruction of the world's rapidly-disappearing forests. Emissions from tropical deforestation are comparable to the emissions of all of the European Union, and are greater than those of all cars, trucks, planes, ships and trains worldwide. According to the Stern Review, protecting the world's standing forests is a highly cost-effective way to cut carbon emissions and mitigate climate change. The United Nations has proposed a framework known as REDD (Reducing Emissions from Deforestation and Forest Degradation in Developing Countries) that would provide financial incentives to rainforest nations to protect their forests, in an effort to make forests worth "more alive than dead." Implementing a global REDD system will require that each nation have the ability to accurately monitor and report the state of their forests over time, in a manner that is independently verifiable. However, many of these tropical nations of the world lack the technological resources to do this, so we're working with scientists, governments and non-profits to change this. Here's what we've done with this prototype to help nations monitor their forests:

Start with satellite imagery
Satellite imagery data can provide the foundation for measurement and monitoring of the world's forests. For example, in Google Earth today, you can fly to Rondonia, Brazil and easily observe the advancement of deforestation over time, from 1975 to 2001:

(Landsat images courtesy USGS)
This type of imagery data — past, present and future — is available all over the globe. Even so, while today you can view deforestation in Google Earth, until now there hasn't been a way to measure it.

Then add science
With this technology, it's now possible for scientists to analyze raw satellite imagery data and extract meaningful information about the world's forests, such as locations and measurements of deforestation or even regeneration of a forest. In developing this prototype, we've collaborated with Greg Asner of Carnegie Institution for Science, and Carlos Souza of Imazon. Greg and Carlos are both at the cutting edge of forest science and have developed software that creates forest cover and deforestation maps from satellite imagery. Organizations across Latin America use Greg's program, Carnegie Landsat Analysis System (CLASlite), and Carlos' program, Sistema de Alerta de Deforestation (SAD), to analyze forest cover change. However, widespread use of this analysis has been hampered by lack of access to satellite imagery data and computational resources for processing.

Handle computation in the cloud
What if we could offer scientists and tropical nations access to a high-performance satellite imagery-processing engine running online, in the “Google cloud”? And what if we could gather together all of the earth’s raw satellite imagery data — petabytes of historical, present and future data — and make it easily available on this platform? We decided to find out, by working with Greg and Carlos to re-implement their software online, on top of a prototype platform we've built that gives them easy access to terabytes of satellite imagery and thousands of computers in our data centers.

Here are the results of running CLASlite on the satellite imagery sequence shown above: 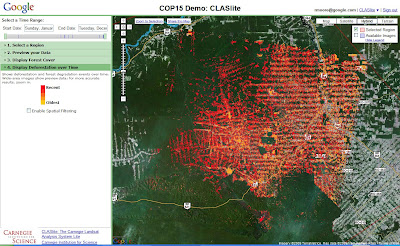 CLASlite online: This shows deforestation and degradation in Rondonia, Brazil
from 1986-2008, with the red indicating recent activity
Here's the result of running SAD in a region of recent deforestation pressure in Mato Grosso, Brazil: 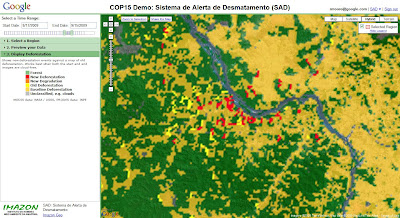 SAD online: The red "hotspots" indicate deforestation
that has happened within the last 30 days
Combining science with massive data and technology resources in this way offers the following advantages:
As a Google.org product, this technology will be provided to the world as a not-for-profit service. This technology prototype is currently available to a small set of partners for testing purposes — it's not yet available to the general public but we expect to make it more broadly available over the next year. We are grateful to a host of individuals and organizations (find full list here) who have advised us on developing this technology. In particular, we would like to thank the Gordon and Betty Moore Foundation for their close partnership since the initial inception of this project. We're also working with the Group on Earth Observations (GEO), a consortium of national government bodies, inter-governmental organizations, space agencies and research institutions through GEO's Forest Carbon Tracking (FCT) task force. Last month together we launched the GEO FCT portal and are now exploring how we can also together bring the power of this new technology to tropical nations.

We're excited to be able to share this early prototype and look forward to seeing what's possible.