Searching for gold during the Games 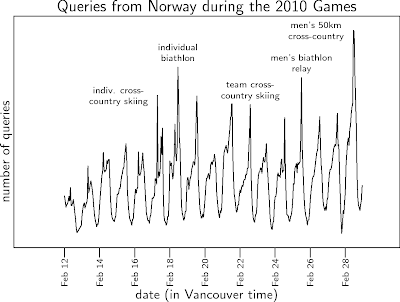 (Click on any image to enlarge)
Japan
Japanese athletes won silver and bronze medals in speed skating and figure skating — correspondingly, interest peaked on the days when those competitions took place. And although they ended the Games ranked eighth in the world, チーム青森 ("Team Aomori") generated a lot of queries for カーリング ("curling"), カーリング チーム青森 ("Curling Team Aomori"), and team member 本橋麻里 (Mari Motohashi). Queries also peaked when snowboarder Kazuhiro Kokubo, who had previously caused controversy by wearing sloppy attire, competed in the men's halfpipe event. The timeline also clearly shows the effect of television, with each day's first peak representing the actual time of the event and the second, larger peak occurring in the evening. 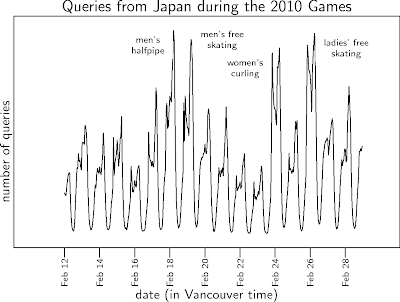 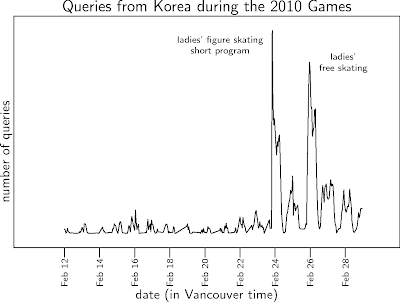 United States
Americans were interested in both the opening ceremonies and the unfortunate death of Georgian luger Nodar Kumaritashvili. The men's free skating program on February 18, when Evan Lysacek won gold, drew many more searchers than the women's skating program on February 25, in which there was no American medalist. Interest in the unexpectedly good performance of the USA men's hockey team versus Canada (February 21) and against Switzerland (February 24) was exceeded by the exciting Canada v. USA final (February 28), which ended with a Canadian win in overtime. (Incidentally, the success of the men's hockey team also led searchers to look for information about a historic USA win. Searches for Miracle on Ice peaked the day after the USA team beat the Canadian team in the preliminary rounds.) Much of the television coverage in the U.S. was tape-delayed; queries arrived during the events but typically peaked during the evening TV broadcasts. 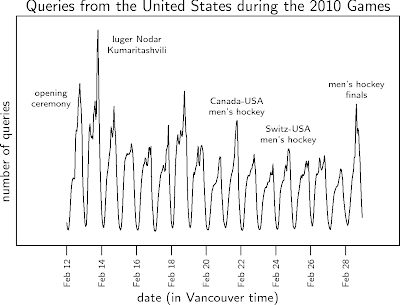 Canada
Canada was not only the host — it also won the most gold medals of any region during any such games. Like the U.S., interest began with the opening ceremonies, and was dominated by men's hockey queries, causing a huge spike during the gold-medal game on February 28 as well as smaller spikes for games against USA (February 21) and Russia (February 24). The final women's hockey game against the U.S. on February 25 also caused a small bump in searches. 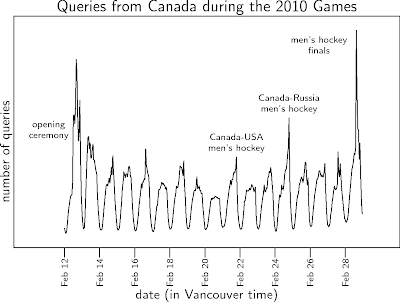 Canada took home the most gold medals, while the U.S. won the most medals overall. But where did Games-related searches dominate? To find out, we looked at the regions which had the highest percentage of Games-related searches out of all queries. Perhaps not surprisingly, Canadians were more than twice as likely to search for "Vancouver 2010", "medal count," or their favorite athletes as their southern neighbors, which were the second most likely to make Games-related queries. And although the Netherlands was not a leader in the medals count, its citizens' Games-related query proportion was the third highest in the world.

We hope you had a great time watching — and searching for info about — the Games. We'll see you again in a few years!