The 2010 tax season story, as told by Google search

Today, April 15, is the due date for federal tax returns in the U.S. Now that everyone’s submitted their taxes in on time (we hope!) we wanted to take a look back at the last few months and tell the story of this year’s tax season through Google search.

Spoiler alert — we’re starting our tax season search story at the end. As the filing deadline has approached over the last few days and weeks, we’ve seen a flurry of search interest about taxes and tax related topics. Compared to search volume from the final week of the 2009 tax season, we’ve seen significant increases in searches for terms like [file taxes] and [tax filing extension]. As of late last week, searches for [file taxes] had increased by 16% from last year. This spike in search interest leading up to April 15 prolongs a pattern of search trends that we’ve seen for the last several years; from 2006 to 2009, searches for [file taxes] rose an average of more than 51% between April 8 and April 15. 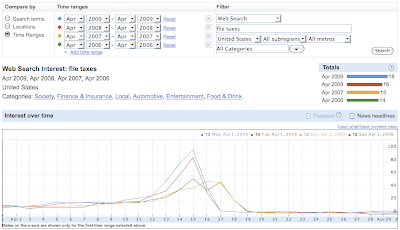 Perhaps less expected than this final peak is the sizable spike in search volume that we see several months before April 15, around the time that W-2 forms become available. This occurs in early February and, as you can see below, there’s a noticeable increase in searches such as [get W2 form] that are related to the beginning of the tax-filing.

In general, tax season search trends look pretty similar each year, but if we dive deeper, there are lots of mini-trends to explore, often triggered by unforeseen and/or unique world events. For example, we saw a flurry of search interest following the passage of the healthcare reform bill in March. The sharp increase in searches for terms like [taxes healthcare] and [healthcare tax increase] likely reflected curiosity about the implications of the new law on tax filings.

We saw a similar trend following the tragic earthquake in Haiti. The outpouring of support for victims in Haiti generated increased interest in the details of charitable donations as they related to taxes; searches queries like [haiti donation tax] were noticeably high in January.

Unfortunately, the implications of heightened unemployment levels were also top of mind this year, and we saw an interest in the effects of joblessness on tax payments and tax filing. Queries like [unemployed taxes] and [unemployment tax refund] were noticeably elevated compared to 2009 search volume, in particular around the season’s first spike. 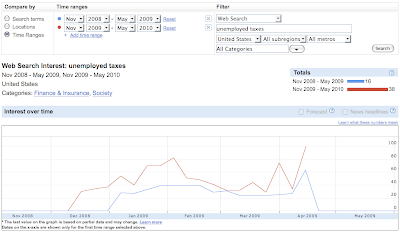 Hopefully, we’ve shed some light on what your fellow taxpayers were interested in over the course of tax season and, via search trends, provided a sense of the different types of events that might affect taxes and tax filing. Until next year!