A different kind of company name

Early last month the mayor of Topeka, Kansas stunned the world by announcing that his city was changing its name to Google. We’ve been wondering ever since how best to honor that moving gesture. Today we are pleased to announce that as of 1AM (Central Daylight Time) April 1st, Google has officially changed our name to Topeka. 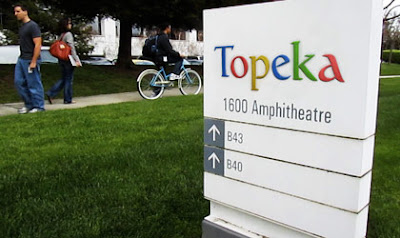 We didn’t reach this decision lightly; after all, we had a fair amount of brand equity tied up in our old name. But the more we surfed around (the former) Topeka’s municipal website, the more kinship we felt with this fine city at the edge of the Great Plains.

In fact, Topeka Google Mayor Bill Bunten expressed it best: “Don’t be fooled. Even Google recognizes that all roads lead to Kansas, not just yellow brick ones.”

For 150 years, its fortuitous location at the confluence of the Kansas River and the Oregon Trail has made the city formerly known as Topeka a key jumping-off point to the new world of the West, just as for 150 months the company formerly known as Google has been a key jumping-off point to the new world of the web. When in 1858 a crucial bridge built across the Kansas River was destroyed by flooding mere months later, it was promptly rebuilt — and we too are accustomed to releasing 2.0 versions of software after stormy feedback on our ‘beta’ releases. And just as the town's nickname is "Top City," and the word “topeka” itself derives from a term used by the Kansa and Ioway tribes to refer to “a good place to dig for potatoes,” we’d like to think that our website is one of the web's top places to dig for information.

In the early 20th century, the former Topeka enjoyed a remarkable run of political prominence, gracing the nation with Margaret Hill McCarter, the first woman to address a national political convention (1920, Republican); Charles Curtis, the only Native American ever to serve as vice president (’29 to ‘33, under Herbert Hoover); Carrie Nation, leader of the old temperance movement (and wielder of American history’s most famous hatchet); and, most important, Alfred E. Neuman, arguably the most influential figure to an entire generation of Americans. We couldn’t be happier to add our own chapter to this storied history.

A change this dramatic won’t happen without consequences, perhaps even some disruptions. Here are a few of the thorny issues that we hope everyone in the broader Topeka community will bear in mind as we begin one of the most important transitions in our company’s history:

Finally, we want to be clear that this initiative is a one-shot deal that will have no bearing on which municipalities are chosen to participate in our experimental ultra-high-speed broadband project, to which Google, Kansas has been just one of many communities to apply.