Climate tools for Copenhagen and beyond

Representatives from around the world arrived in Copenhagen, Denmark today to negotiate a successor treaty for the Kyoto Protocol. This 15th Conference of Parties (COP15) has been called the most important conference in a decade.

In fact, in an unprecedented initiative, 56 major newspapers in 45 countries published a shared editorial calling on politicians and negotiators gathering in Copenhagen to strike an ambitious deal on combating climate change. The editorial appeared in 20 languages including Chinese, Russian and Arabic. It asserts that the Copenhagen summit has the power "to shape history’s judgment on this generation: one that saw a challenge and rose to it, or one so stupid that we saw calamity coming but did nothing to avert it."

So in honor of this important event, we've built a number of new tools to give delegates — and you at home — easy access to useful information to help visualize and explore data and issues relating to climate change.

In September we launched a series of new Google Earth climate change layers and tours in collaboration with the Danish government. Check out these tours to explore the effects of climate change and get a better understanding of the scenarios that could unfold if we don't stop this environmental threat. The tours were developed together with leading environmental organizations and individuals including The World Wildlife Fund and Greenpeace as well as Al Gore, Governor Arnold Schwarzenegger and others. 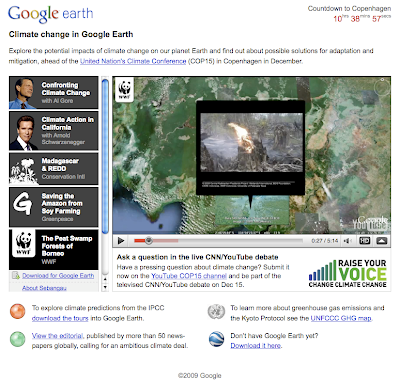 Over the past weeks, many of you have already uploaded personal statements of your hopes (and fears) for our planet through YouTube and the Raise Your Voice campaign. Now the search is on for the best video and text questions to be delivered to global leaders and climate activists who will come together in Copenhagen to answer the top-ranked questions from the YouTube channel in a townhall produced by CNN International. Voting with Google Moderator will continue until December 14th. 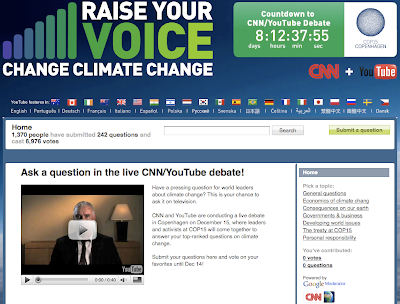 An Australia-based Googler also recently launched a tool called Show your Vote which puts the supporting voices for a global deal right on a Google Map. This tool can be integrated into any website to help drive the outreach and collect votes, and can already be found on UNFCCC, COP15.dk and WWF Earth Hour.

And if you're in Denmark with us, check out two unique installations powered by Google and YouTube. The first, a giant CO2 CUBE, is an art installation that visualizes one metric ton of carbon dioxide and has YouTube videos streaming on its walls. The second is an interactive Google Earth simulator made up of flat-screen panels and controlled with a free roam Space Navigator 6-axis joystick. (It's cool, trust us.) Welcome to Copenhagen!